Before we went to Medellin, we’d spent a lot of time in the cities of Cartaganea and Santa Marta on the Coast. After a couple weeks, we were ready to get out of the city for awhile and see what the land was like.

On the first day we took a van an hour into the jungle, then another hour on a dirt road until we arrived to Mamey, our starting point. (The town of Mamey was renamed “Machete” – Why would someone rename a town “Machete” you might ask?-  Prior to 2004 when the Colombian army took over the region many farmers from surrounding areas would go into Mamey for drinks at night.  If one farmer had a daily dispute with another, they would settle it in town that night after a few drinks by way of a machete fight.  These fights happened so often during this time period that the locals decided to rename the town Machete.)

The first day of hiking, from Machete to campsite #1, was supposed to be an easy walk through the jungle.  After about 30 minutes of leisurely walking,  and smiling often, we hit our first set of switch backs, which Christina and I later renamed “Devil’s Backbone”. Devil’s Backbone was approximately 100 switchbacks and about 4,000 ft of an elevation change.

We didn’t know if it was Devil’s Backbone, the 100 degree heat, the humidity (that made us feel like we were breathing into a wet towel), the perpetual sweat (that was blinding our eyesight), the variable terrain, the volatile conditions or the possibility that we were just really out of shape that made this so hard. 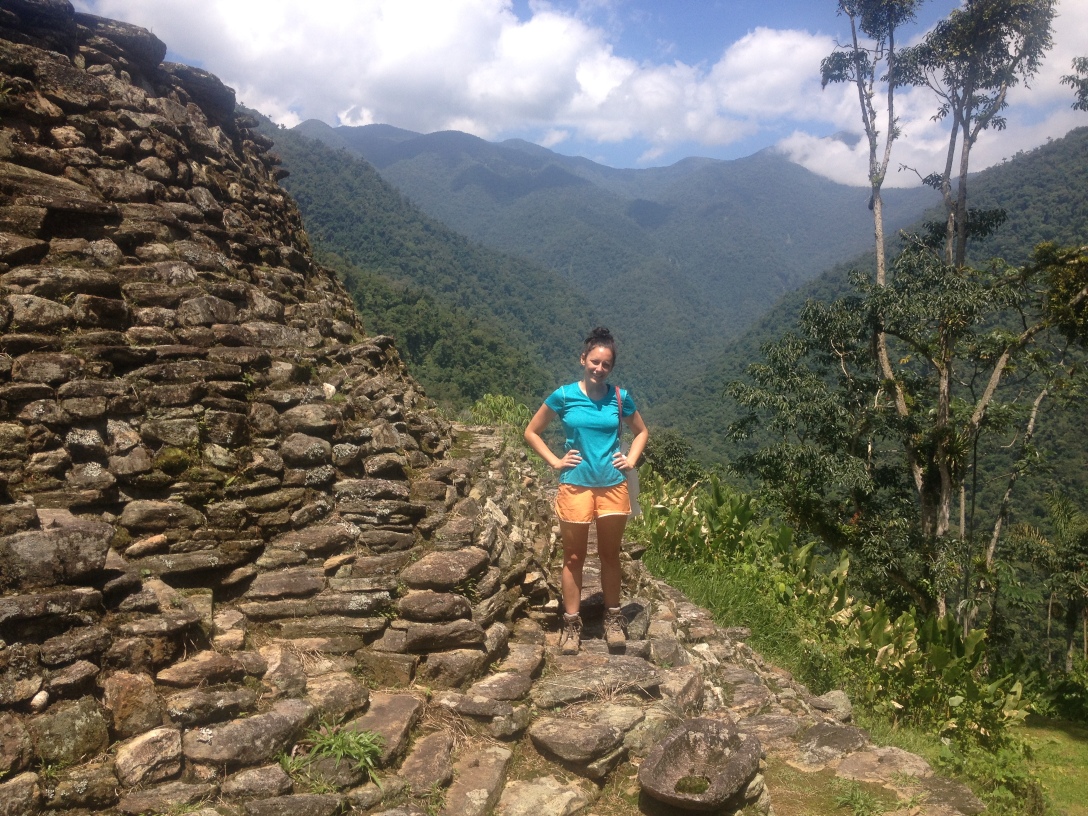 After a few days the difficulty continued and we decided that we were just in fact very out of shape. We came to this realization after our guide Jhon asked us if we were ill and that is why we were hiking so slow.

With great challenge comes great reward and we were extremely rewarded by the site of The Lost City, the interaction we had with the indigenous Kogi people, and the spectacular views. Neither of us regret this arduous journey for one second.

After the hike was over we hired a van to take us from Machete back to the city of Santa Marta.  The van started at the top of the only road in Machete and slowly drifted down the hill and out of town.  As we drifted down the hill people started to run up to the van from their houses and businesses asking the driver for things to bring back/bring to Santa Marta. One guy just yelled from his restaurant “pig and chicken!” and the driver gave him a thumbs up and rolled on out of town.  I couldn’t help but think what a vague order that was. If someone asked me to pick up “pig and chicken” I would surely have at least three follow up questions.

At the bottom of the town, a mother quickly kissed her two kids and threw them in the back of the van next to two dirty gringos.  We then drove 20 minutes out of town and stopped on the side of the road. The driver turned off the van without saying anything, got out and walked to a roadside store, ordered a milkshake, plopped down in a plastic chair facing the van and proceeded to stare at us locked inside, while he slowly drank his milkshake. Everyone else on board seemed unfazed by this. About 10 minutes passed by before a man inside our van yelled “Vamanos!” and we were soon back on our way to Santa Marta.  I can’t help but think what the reaction might have been if this bus ride had happened in the U.S. Probably just a lot of impatient scowls until the people made it home to negatively review this experience on TripAdvisor.

One of the best parts about the time we spent in this region was being able to meet and learn about the Kogi tribe.

Short History: The Kogi are descendants of the Tairona people of coastal Colombia. They have inhabited Colombia since the 1st century A.D.  Around 1,000 A.D.  they were forced from the coast by the Carib people and retreated inland to the Sierra Nevada mountains of Colombia.  When the Spanish arrived 500 years later the Kogi were able to avoid most of the Spanish conquest by living in remote areas of the mountains that the Spanish could not get to.  There are approximately 20,000 Kogi people living in Colombia today.

Our interaction: The first meeting we had with the Kogi people was in Minca before the Lost City trek. We were staying at a campsite on top of a mountain and 3 Kogi men were camping right next to us.   We came to find out that these men walked 4 days to the top of the mountain to celebrate a Kogi boy becoming a man.  What I like to call a Kogi Bar Mitzvah. During the Kogi Bar Mitzvah the men were not allowed to sleep and they spent the nights chewing coca leaves, drinking Aguadente, and praying to their Gods.

I wish I could explain more about the significance of this celebration, but a lot of it is still unknown to people outside the tribe.  The Kogi work hard to keep their cultural integrity and they don’t often share information about ceremonies and rituals with others.

After this experience, while on the trek, we were able to speak with two different Kogi men in Parque Tayrona where we asked them questions about their life.

What we do know:

The Kogi people are fascinating to me.  Against all odds they’ve managed to maintain a peaceful, prosperous, and sustainable livelihood for thousands of years.  In today’s world, it seems impossible for a culture to survive on the backbone of peace, compassion, community, and simplicity while detesting violence, pollution, development, and worldly desires.  The Kogi live in harmony with the land, their wants don’t extend their needs and their lives appear to be happy and fulfilling.  The lessons we learned from the Kogi could be great lessons for all of humanity. Their continued existence gives me hope for the future.

One thought on “The Lost City and the Kogi”