One of the few places Ben and I had heard of before coming to Myanmar was Inle Lake. It’s a large lake that is 13.5 miles long and 7 miles wide, situated in the mountains of Central Myanmar.

There are about 70,000 people living on the lake, most of which are the “Intha” people, Intha meaning “sons of the lake”. Most are self-sufficient farmers and fisherman. The fishermen have a very distinctive method of rowing, which has made the lake famous. Instead of rowing in a sitting position, they do so standing on one leg with the other leg wrapped around their oar. They paddle with one leg while balancing with the other. In a standing position they are able to better see the plants and reeds floating in the water. Photographs of these unique fishermen have become iconic to Myanmar.

Being in the same region as the Lake we weren’t going to miss it. We were still in the mood to hike and decided to get a guide and go by foot. A trek to Lake Inle would leave from the little mountain town of Kalaw, a 10 hour bus ride south of Hsipaw.

Myanmar is a big country and requires a lot of bus time. To make these long journeys we’ve been taking local overnight busses. The nicer, VIP buses usually fill up quickly and, because we decide everything at the last minute, we’ve never managed to get a spot on one.

Ben and I have spent many, many hours on buses throughout our travels. I’ve always really enjoyed the experience and been able to exhibit an immense amount of patience throughout each trip. However, after 3 local, overnight buses around Myanmar, my patience is running a little thin. The buses are…rough. And the 10 hour night bus to Kalaw was the roughest. It’s not just the bumpy, windy terrain. It’s the tiny seats, that are crowded beyond capacity (often people cram on stools down the aisle), the loud karaoke music blaring until 3am, the random moments in the middle on the night when the driver flashes all the lights on, and the intermitted sound of people puking…combined with the windy, bumpy terrain. Sleep is usually not an option.

The only seats left on the bus to Kalaw were in the very back row (the ones no one wants because they don’t recline). We sandwiched ourselves in the back corner. Claustrophobia soon set in which was compounded by the women sitting next to me who had developed a serious case of motion sickness, a problem many locals here develop on long bus trips.

At one point a man boarded and sandwiched himself between us. He sat very poised, seemingly unaware of his surroundings or the length of time he would have to endure them. He didn’t seem to notice the baby kicking him, the women puking in his ear, his tiny seat that didn’t recline or the loud music. At one point he was even smiling. Ben and I were mystified by his patience. I tried to draw strength from his Buddha-like nature. But as soon as some regular seats opened up late in the night he didn’t hesitate to snag one. Before doing so he tapped me to let me know that there were two seats more available for Ben and I. He was a saint and I will always remember him.

We arrived in Kalaw feeling like we usually do after a Myanmar-night bus, completely wrecked. After a few hours of sleep we found a good trekking guide in town that was making a trip the following morning. The next day we met our guide and hiking group, couple from England and a guy from Australia who were around our age. Inle Lake is a 60km walk from Kalaw that we were to complete in 3 days. 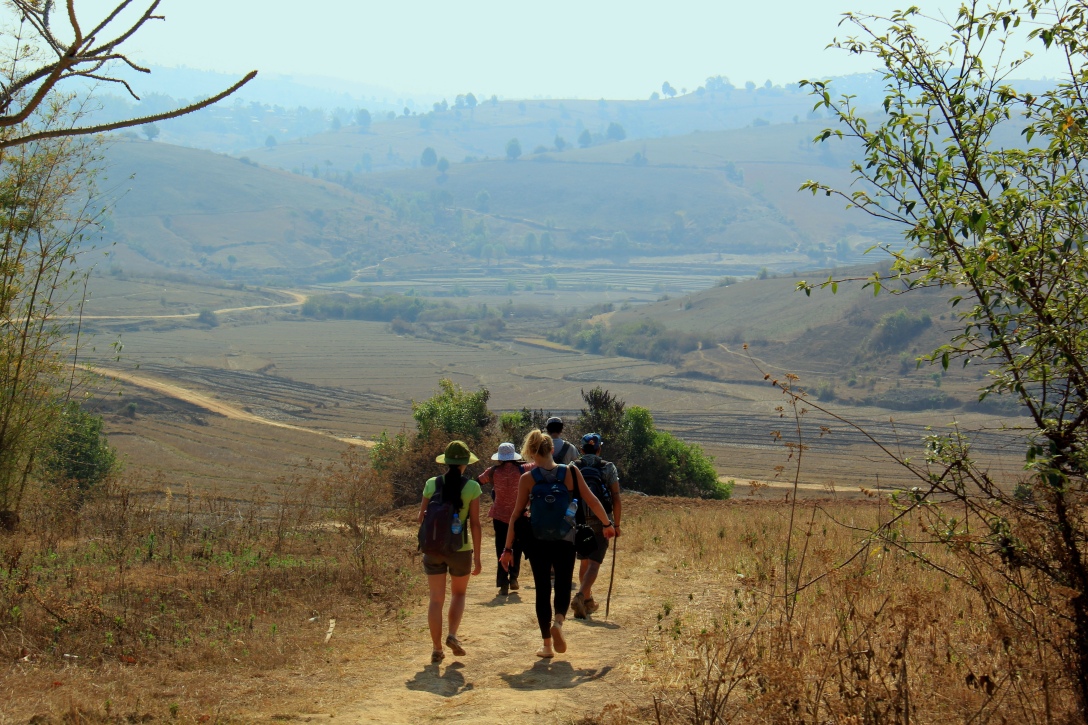 The trip was really enjoyable from start to finish. Our guide was a young 23 year old who was born in Kalaw but her lineage was Nepali. She was one of the few female guides in Myanmar. I made the mistake of asking her if she had ever been to Nepal to visit her grandparents who she mentioned still lived there. For most her life people in Myanmar were not allowed to travel outside the country, so the answer was an obvious ‘no’. Only recently have borders opened up and I’m still not sure the rules on international travel. After growing up in such an isolated environment, she seemed really interested in learning about western cultures. It’s one of the things she loved most about being a guide, she said.

We chatted about cultural differences here and there throughout the journey. Things which seem so normal to us, seem unbelievable to her. For example, tanning beds. Most people in Myanmar, and in the rest of Southeast Asia, abhor sun exposure because they want to look as white as possible. To them, white creamy skin is beautiful and dark skin represents a life lived in the laboring class. Women especially cover their entire body, wearing socks with their sandals, hats, gloves, and jackets, even in the hot summer months. The fact that we pay money to lie in an oven-like machine that will shoot UV rays at our body, so that our skin will turn darker, seemed to blow her mind.

We averaged about 6 hours of walking each day, stopping at villages along the way. We ate homemade traditional Shan and Burmese food and slept in one of the villagers’ homes at night. Most people live in woven thatch homes with wooden floors. Water is fetched daily from a community tap and showers consist of a large bucket of water that has to be scooped up and poured over the body. In the mornings we would see a few people leaving for their fields on a wagon pulled by cows. Some villages are so small they only consisted of 20 or so families who are mostly related. As for marriage, most marry someone living in their own village, and some may go to a nearby village. It is rare, and looked down upon, to marry outside the tribe. Their lives seem very simple and communal. 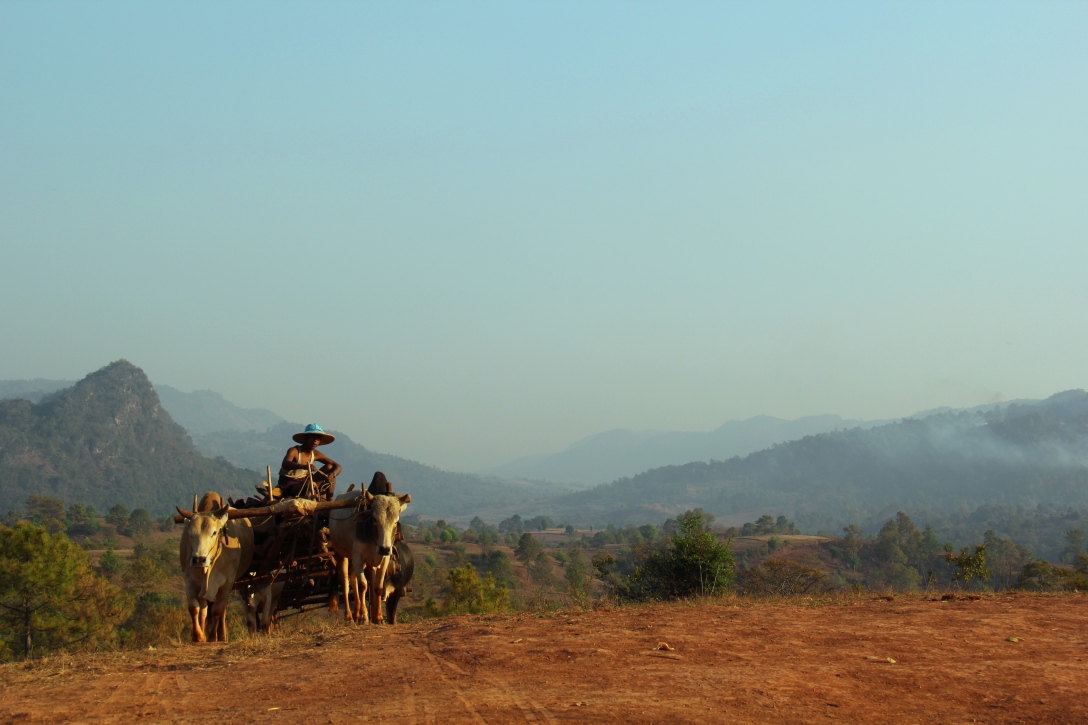 One of the more interesting villages we stopped in belonged to the Pa-O people. The Pa-O believe to be descended from a female dragon. She is their mother and they hope to reunite with her in the afterlife. As we walked through the village, our guide explained that the reason many people don’t have windows in their homes is so it will feel more like a cave inside. They do this to pay respect and make them feel closer to their dragon mother.

We all slept on the floor, usually under a nat shrine. Nats are spirits that are worshiped in conjunction with Buddhism. Universally, there are 37 Nats which were once human along with various other nats (spirits of trees, water, animals, etc) which vary depending on the tribe. In the homes we stayed in the family had placed offerings to the nat such as whiskey, flowers, and rice. The most important rule we were to remember while staying in their homes’ was to refrain from pointing our feet towards the shrine while lying down.

The day we arrived to the lake was Ben’s birthday. Unfortunately the night before Ben got a stomach bug and spend the first wee hours of his 30th birthday hovered over a hole in the ground, in a poorly constructed shack behind the house. His health and birthday improved as we walked our last few hours to the lake. When we arrived we jumped on a boat that took us to Nyuangshwe, our base town for exploring Inle.

The next day we took a full day boat trip around the lake. All the villages we passed through were raised on stilts directly over the water. Their homes, markets, restaurants, post office, gas stations, mechanic shops – absolutely everything – is on stilts above water. There are no roads, sidewalks, or yards just canals. One thing was evident, the lake is their livelihood and it is used for everything. They wash themselves and their clothes on their stairs, which lead down into the water. Most just plunge their head right in the lake to wash their hair. Even their vegetables are grown on floating gardens.

It is a life so unlike most others in the world and went on relatively unnoticed for generations. As we cruised by their homes I wondered what they think of this recent increase in white faces, passing through their villages and snapping photos of their everyday lives.

There was a layer of fog while we were there, making the surrounding mountains almost invisible. In the center of the lake it was difficult to make out where the lake ended and the sky began. Through the glow we caught sight of several one legged fishermen, balancing gracefully along the silver lake, while using their arms to cast their nets. Sometimes when we passed by, they would proudly pose for us. 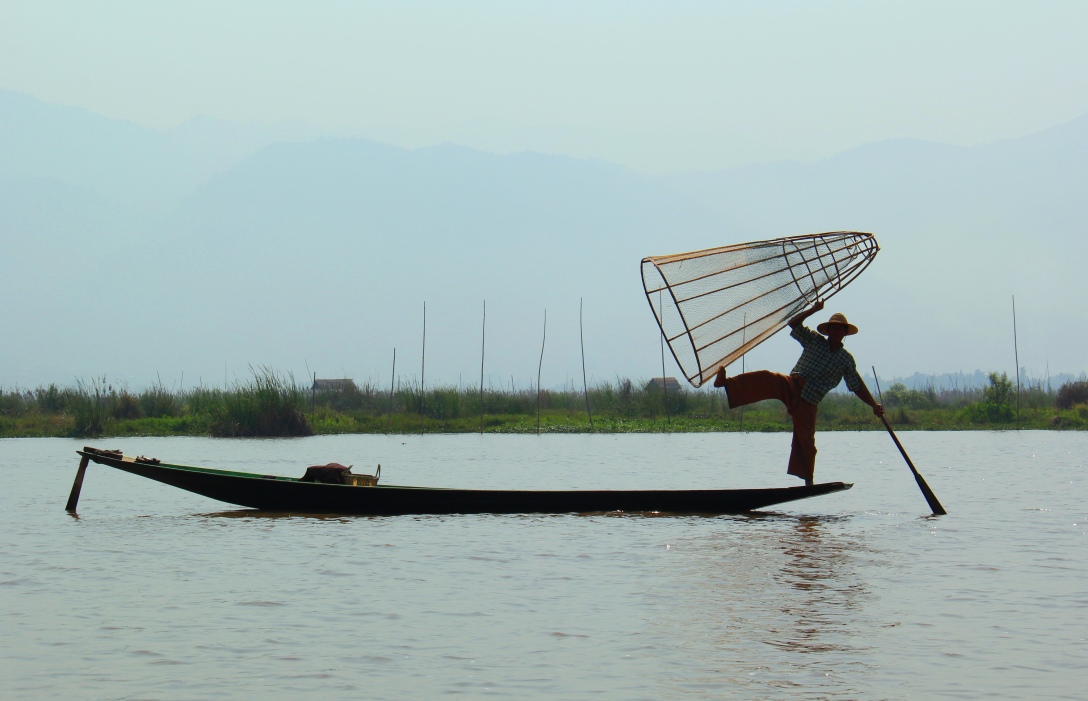 We stayed only one more day at the lake before heading back to Yangon. We only have a few days left in Myanmar with several places still unseen. As the days on our visa run short, we’ve been forced to think about the future and make some decisions. Most importantly, where we will go next. April happens to be a great weather window in most of the Himalayas. Trekking the Annapurna circuit is an experience we didn’t want to leave Asia without, so this naturally seemed like our next step. Before leaving Lake Inle, we booked a flight to Kathmandu, Nepal for later this month.

I’m writing this post on our overnight bus back to Yangon. This time we are riding a VIP bus and I’m almost speechless at the difference between the two classes. It feels more like a luxury airplane than a bus. Right now I’m sitting in my large leather seat, about to be served dinner, while I watch a movie on my own personal TV. Although such luxury isn’t usually our style, I can’t deny the relief I feel. No kicking babies and no loud karaoke music. I may not have any funny stories from this experience but I will have a good night’s sleep.

4 thoughts on “Walking to Inle Lake”